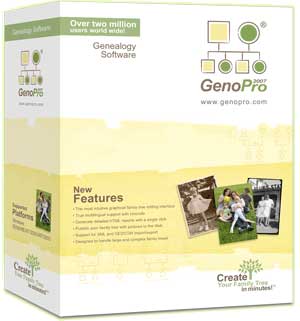 Official Description: GenoPro is a user-friendly comprehensive software that allows you to draw family trees and genograms that you can share with your whole family.

GenoPro 2007, version 2.0.0.1
* Fixed crashing bug when searching text on a computer without any printer driver installed.
* Fixed bug by allowing a place to inherit the same category as its parent place.
* Added code to remember last selected objects when saving to XML.
* Improved report generator to include GeoMapping via Google Maps.
* Improved contextual help for sending file to another user and performing an online backup.